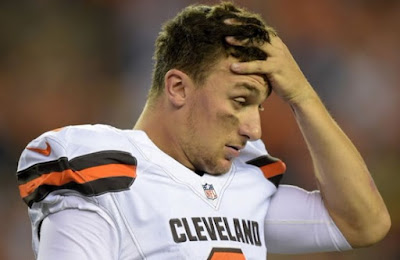 Not so long ago, the future was blazing bright for fleet-footed scrambling QB Johnny Manziel. Defenses couldn’t catch him and half the NFL wanted him. The Browns won that lottery and quickly moved to establish Johnny Football as the face of their franchise.

Somebody should have checked under the hood first. Manziel not only failed to live up to his hype, he actively negated it with drunken antics and constant public relations nightmares.

There comes a point in every troubled player’s career when off the field struggles overshadow on the field success. When you’re not doing much of anything, that clock ticks much faster toward oblivion. For Manziel, the time limit was two seasons. Now he’s gone, and the Browns are, once again, looking for a quarterback of the future. Manziel rode in on a veritable ticker-tape parade. He left with a whimper, only a quick statement and minimal comment as to any reasons.

Not that anyone needed a lengthy statement. Just look at ESPN over the past year or so if you’re unclear as to the motivation. And the police blotter, of course.

While no one is saying for certain, it seems the straw that broke the camel’s back was not Manziel showing up late to meetings – or leaving town entirely. It was an incident in which his girlfriend was battered. She went to the hospital, and, with that, the party train was over for Johnny Football.

Possibly the worst blemish on Manziel’s record, though, is not wins, losses or domestic issues. It was his refusal to go to the Browns season closer. Sure, he was injured, but instead of attending the game and supporting his team, Manziel went to Las Vegas with his friends.

Social media told the rest of the story, images that are front of mind for every single NFL team even considering – however remotely – giving Manziel another shot at living up to his vaunted talent.

Posted by Jonah Engler at 7:57 AM No comments: